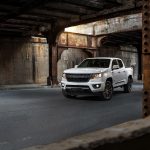 The street-focused 2019 RST is based on the LT trim

DETROIT — November marks the four-year anniversary of the return of the segment-redefining Colorado midsize truck. Introduced as a 2015 model, the Colorado recorded its first full month of sales in October 2014. Since then, U.S. customers have bought more than 428,792 Colorados.

To celebrate, Chevrolet is expanding the Colorado range with two new special editions, the off-road Z71 Trail Runner and street-focused RST, that offer options to match customer interests on the trails and on the street.

“The success of Colorado helped reignite the midsize truck segment, which increased 27 percent from 2015 to 2017,” said Sandor Piszar, director of Marketing for Chevrolet Trucks. “It changed what customers expected from a midsize truck, brought new customers to Chevrolet and has inspired competitors to follow Chevy’s lead.”

The Colorado also helped make GM the most successful truck company for four consecutive years, selling 634,505 more pickups than the closest manufacturer from 2013 through the first three quarters of 2018.

Colorado’s success has been fueled by one of the broadest lineups in the midsize segment — including three powertrains, three configurations and a wide range of models and special editions — with a steady cadence of innovation.

Upon its introduction as a 2015 model, Colorado brought a new standard to the segment with three powertrain options, an EPA-estimated 27 mpg highway and 7,000 pounds of towing capability, and it introduced features such as the built-in Wi-Fi Hotspot with available 4G LTE data.

Since then, Colorado has made updates every calendar year, including: 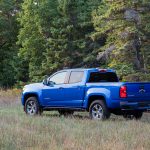 Both new special editions feature the flow-through “CHEVROLET” lettered grille first introduced on the Colorado ZR2 Bison. The grille is also available as an accessory for an MSRP of $395, not including installation or tax.

The Colorado RST builds on the successful street-focused RST models offered on Tahoe, Suburban and the all-new Silverado. For Colorado, the RST is based on the LT trim and adds monochromatic exterior offset with black beltline and body side moldings. It also adds a black tailgate bowtie, Colorado and RST badges. The RST is also the first Colorado to offer 20-inch wheels, finished in low-gloss black.