2019 truck parade for all new trucks 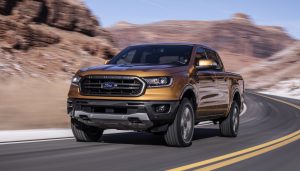 About every 10 years or so most of the trucks will come out all new and shiny over a couple of years. 2011 was the last time this happened in drive trains but all new bodies are farther apart. Ford had all new aluminum body F150 in 2015, then came the all new aluminum body for Super Duty Ford F250 and up in 2017. This year 2018 Ford’s new F150 diesel will be out in the second quarter. I went to the Detroit Auto Show (NAIAS) in January where Chevy showed us the all new 2019 Silverado 1/2 ton and Ram introduced it’s 2019 all new 1500. 2019 GMC is coming next. Ford re-introduced the 2019 Ranger that was missing since 2011. It won’t be out until the beginning of 2019 with the all new Bronco after that. Jeep has a new midsize truck that will join the growing midsize segment in 2019 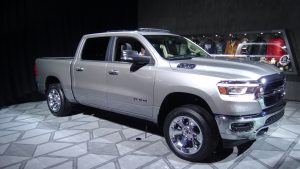 That’s a whole bunch of truck news in just 2 years. I’m getting jet lag just thinking about it. I’ve flown to Detroit so much lately they’re naming a escalator after me at the airport, it’s the one by Starbucks. I fly to Detroit March 1st. It’s OK, the hotels are nice and the food is great. It’s a whole lot better than driving a tractor in circles. I do miss the smell of turned over soil with a disc on the farm. Were was I, yes Ram will be out first with the 2019 Ram 1500 in a couple months. The Ecodiesel will come later. The new Ram will have a 4 in bigger crew cab in front of the rear seat. A 12 inch vertical touch screen makes the cockpit look like aircraft. The tailgate is aluminum. The optional adaptive cruise control will also control the trailer. New grill, hood, bumpers and basically all the skin gives the ram a refined modern look. I do miss the ionic cross-hair grill. New frame, better crash protection and the new eTorque hybrid option on the Hemi V-8. It runs the start stop system, is an alternator and adds 130 pounds of torque. Looking forward to driving one soon. Lots of safety improvements including larger brakes. The Ram Rebel with 4 corner air suspension can lift up 2 inches of ground clearance, optional 33 in tires and a new Electronic Locking Rear Differential. 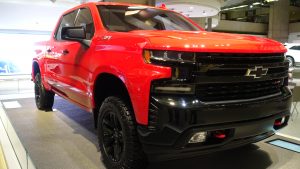 The other all new truck out this year is the 2019 Silverado 1500. Probably available this fall as well as the all new GMC Sierra 1500. 2019 Silverado new nose has small headlights and big grill, reminds me of heavy duties. Again, the crew cab is 4 inches longer in front of the rear seat. It’s good to see that some things,  after dropping the side terminal batteries in 2007 after 30 years of the only one, have finally changed my decade of complaining. You may not notice steering wheel being off set to the left for decades, but it drove me crazy. It’s now in the middle, making it easier to align yourself with mirrors and the hood. And they finally moved the trailer brake controller to right of the steering wheel from the left side. I’ve always asked the engineers with GM, if they’ve ever seen a semi-truck with the trailer brake controller on the left of their steering wheel. Nothing against lefty’s, I have a brother, a sister, cousins, nieces all lefty’s and they are smarter than me. But I think for the average driver, reaction time is longer on the left side. Ram, Ford, Nissan, Toyota all have brake controllers on the right side. I use my trailer brake controller often in the mountains independently of foot brake, to control trailer sway, ice and snow, downhill all good places to let the trailer keep your rig straight. Learning to use the trailer brake controller separate from your trucks foot brake, can save your life.

So much new on the Silverado, anything with a hing on it is aluminum. So I predict we’ll see less Chevy commercials making fun of Ford’s aluminum bodies. But Silverado doors, hood and tailgate are now aluminum. Makes since, the truck is lighter giving you more payload and trailer capacity. Two models have a 2 in factory lift, larger tires that fit well the new round fender openings. The tailgate as optional power up and down. That’s fun. New Chevy cargo box inside the bed walls. Bed walls are closer together adding more volume to the bed. Also in the back seat are doors in the upright seat cushions, that you could slide a rifle into. I see that the DEF tank filler cap is in the fuel door like Ford and Ram and Nissan. So maybe the new Silverado 1500 diesel will have a DEF tank up level with the frame instead of below the frame like GM heavy duty. Did I say 1500 GM diesel? Yes a new inline 6 cylinder Duramax diesel is coming this year. We don’t know if Isuzu was involved or how much power or how much fuel economy. V-8 cylinder engines in the new Silverado have up to 7 cylinder deactivation. Maybe downhill in Kansas. More 10-speed auto tranny’s. It’s an exciting year.