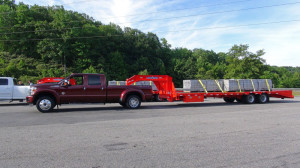 Truck power wars haven’t slowed down. What do you do with more power? I guess speed limits in some states have increased so you can go faster, but now you have to buy a bigger trailer to use all that torque.  It’s a big year for Ford Trucks, in July I was in West Virginia driving new 2015 Super Duty’s towing big trailers in the Appalachian mountains, next week I’ll go to Texas to drive and tow trailers with the 2015 F150 aluminum skin and all. My big problem with Ford Super Duty Power Stroke diesel since 2011, is the lack of an exhaust brake. No button to turn it on, it came on automatically in tow mode according to Ford. We tested it on 7% grades with maximum capacity trailers and were very disappointed, very little exhaust brake. Scroll ahead to this years 2015 second generation Power Stroke diesel F250, F350 and F450 with a larger turbo and a dedicated “exhaust brake” button and it’s night and day. It finally works and works well. New injector tips and larger turbo give the Power Stroke more power with 40 more horsepower up to 440 now, and 60 more lb.-ft torque up to 860. The 6.7L Power Stroke transmission’s torque converter has a higher stall speed which improves throttle response. The bigger turbo uses more fuel so the new injection system is suppose to counter that. This puts Ford above GM and Ram in the power category.

To get higher tow ratings, 2015 F-450 has commercial- grade 19.5-inch wheels and tires, (as they did 2008-2010) upgraded rear U-joints, with new leaf springs, new Dana 130 rear axle, front and rear stabilizer bars and shocks. The steering system has stronger gears and linkages and the fifth-wheel/gooseneck has increased towing capacity. 2015 F450 5th Wheel/Gooseneck Hitch Prep package comes with a 2 5/16 in. ball and 3 in. ball for over 30k trailers. Also new in that package is  larger safety chain tie downs. The brakes, shared with Super Duty chassis cab models, are larger with new antilock calibration. 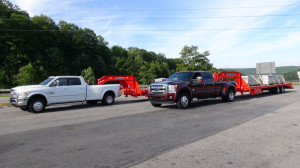 F-350 Super Duty is available with a high-capacity towing package that includes new front springs and a wide track axle like Ford offered before 2011, increasing towing capacity, to 26,700 pounds, from 23,200 pounds, and the gross combined weight rating goes up to 35,000 pounds.