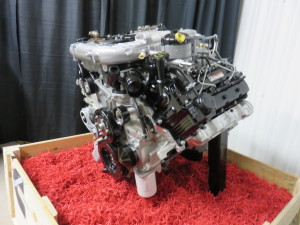 Big news doesn’t happen in the pickup truck world very often. But Nissan has become aggressive after 12 years at the rear of Class one. The new diesel XD is Class one and a half. Blurring the line between 1/2 ton and 3/4 ton pickup truck, Titan XD should be on your shopping list if you need more than a half ton but don’t need to tow a tank. The XD is set up with standard towing equipment. It comes with a Cummins 5.0L V-8 diesel, integrated trailer brake controller, factory gooseneck ball hitch, rear anti-sway bar, recirculating ball steering, towing mirrors and 10 ply tires. Sounds like a 3/4 ton truck, maximum gooseneck rating is 12,314 lbs. which puts the XD above all the 1/2 ton trucks.  3/4 ton diesels start at 16,000 lb gooseneck rating. The XD also has American axles now instead of the previous Dana 44. The rear axle gear ratio is finally a 3.90 instead of the previous 3.30. All the stats are pointing to a towing machine. When you drive the XD, it feels like a big truck, solid like a heavy duty with a nicer rider.  Nissan Titan XD Diesel 2016 First Drive. 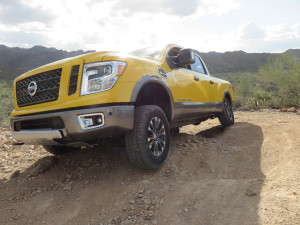 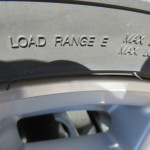 You’d think the XD is a cousin to Ram with the Cummins diesel and heavy duty Aisin 6-speed automatic, but I’m not sure they are even friends. I flew to Arizona to drive the XD before they go on sell in December. The taller boxed frame came from the Nissan full size van, a new larger crew cab and 6.5 ft. bed, it doesn’t remind you of the old Titan. My first mission was driving the Pro 4 X off road package. It was impressive, climbed rocks and deep ruts up 20 percent grade. In the dash you can watch your approach angle, tilt angle and steering angle. I climbed up to 22 percent and tilted to 20 percent. All the important stuff is tucked above the frame. Skid plates go all the way to the front and above the front bumper. I managed to hit the skid plates twice on rocks and set the passenger side frame on a rock. Ground clearance was great. Putting along in 4×4 in low range, I could stop anytime and get out and take pictures. Going down the Arizona hills was just as manageable with hill decent on using the ABS on the front wheels to idle down the rocks just using the steering wheel. 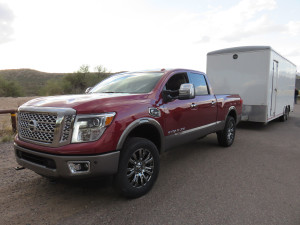 I did tow a 9000 lb trailer. Nissan has been talking about the towing ability of the XD especially goosenecks for a year now. I was expecting to be towing goosenecks, but not yet. Only trailered for a few miles up a 6 % grade. My guess is I needed a heavier trailer to get the acceleration where I expected it from the 5.0L Cummins with 310 horsepower and 555 lb ft. of torque. I did get some down hill grade shifting from the Aisin 6-speed transmission, just not long enough ride to evaluate it. I was disappointed that the Cummins diesel didn’t have an exhaust brake. It does have a waste gate between the low and high pressure compressor wheels in the turbo that could become an exhaust brake. I’m not overwhelmed by the power from the XD yet, but next month I’ll be towing trailers for a week with a Titan XD in Texas, so I’ll know more and finish my opinion of the new truck. So far I like it, it’s very quiet, from inside you wouldn’t know it’s a diesel.  Laminated glass helps the quiet, the  interior is very usable with a large center console that adjusts. The rear of the crew cab has hydraulic mounts like Ram and GM heavy duties, it improves the ride. XD has big disc brakes, 14 in. front and 14.4″ on the rear. 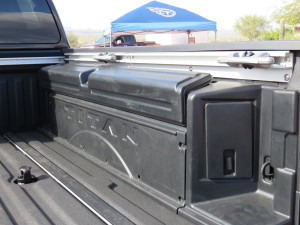 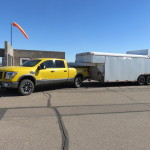 The original 2004 Titan introduced electronic stability control, bed management cargo tie downs, 180 degree King cab doors, factory sprayed in bedliner and tailgate torsion assist. The 2016 Titan XD has a Titan Box option which is inside the bed along the fender wheel on both sides, enclosed with a drain for ice and beverages. The Titan box is below the bed rail so it doesn’t interfere with camper shells and still has 4 ft. of room between the fender wells for plywood and ATV’s. On the crew cab, under the seat is a fold out floor for a flat surface and storage under that. The new seats fit me, I like them, optional running boards go all the way back to the rear fender wheel like they all should. 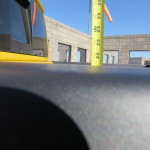 The Titan XD has a GVW over 8500 lbs so you won’t see a EPA fuel mileage rating. I will get some real world MPG testing next month. 26 gallon fuel tank, DEF tank is 4.5 gallons, two fuel filters, primary on the frame has a water drain. Also new for this year is the trailer light testing with the key fob. By yourself, walk to the rear of the trailer and push the right button and the trailer brakes, blinkers and running lights will all cycle threw and you’ll know if they work. It’s magic.

The new Titan XD is bigger all around, the bed is deeper by a couple inches (21 3/8″). We’ll find out if the bed-rail clearance is enough when we tow our first gooseneck. The gas version of the Titan for 2016 is coming later, even a V-6. The first Titan born in 2004 and they just wanted the cream of the truck buyers, offering only one engine and one transmission, a couple of cabs and beds. Now with 12 years of sluggish sales, Nissan as learned they need fleet business to get the numbers. This is going to be an interesting transformation, chapter 2.