MrTruck’s Web Wisdom of Truck Safety. We all want a truck to go 300,000 miles and we  think we’ll live forever. When I sold trucks, I was surprised at how many folks had accidents in their trucks and unhurt, they came back to me to buy another truck! Trucks are safer  than cars, don’t let anybody fool you. I’m looking for ways and products to keep trucks  and trailers safer. On this page you will see what I find. Is your hitch rated for your trailer to pull your truck? 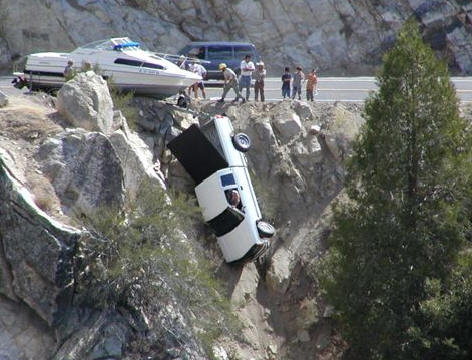 Maximum Tow Video watch what the wrong tow vehicle will do.

NHTSA Check out the latest safety issues the government monitors.

The F-150 is the first, and only, pickup truck to receive a “best pick” in the high-speed frontal offset crash category.

There’s a new tool for anxious parents teaching their teenagers how to drive — a DaimlerChrysler AG-sponsored video game where kids earn points by avoiding driving hazards. DaimlerChrysler hopes the Road Ready Streetwise game will help prepare teens for driving before they actually get behind the wheel. At a news conference, Chrysler Group president and CEO Dieter Zetsche said the game will raise awareness about all kinds of hazards new drivers face. “We set out to build a more pragmatic way to help parents prepare their teens for safe driving,” Zetsche said. “Video games are a better way.” Teens can download the game for free on the Web (www.roadreadyteens.org). Players progress through six levels, working through driving challenges like deflecting questions from other teens in the car, answering a ringing cell phone and eating. Meanwhile, the driver must avoid trucks backing into their lanes, swerving drunk drivers, skateboarders and even a UFO. Jeffrey Runge, chief of the National Highway Traffic Safety Administration, said the game would help teens guard against traffic accidents. Road fatalities are the leading cause of death for Americans under the age of 34. (Source: The Detroit News)

(Dearborn, MI) — According to data from the National Highway Traffic Safety Administration (NHTSA), more than 6,000 teens die each year from injuries resulting from car crashes – making it the number one killer of teens in America. Yet, a recent national survey by Wirthlin Worldwide shows that many people underestimate the challenges novice drivers face. When asked, 56 percent of Americans named drug abuse as the leading health threat teenagers face, with only 13 percent identifying teen driving crashes as the number one threat. More…

ENJOYTHEDRIVE.COM SUGGESTS WAYS TO SAVE MONEY AT THE GAS PUMP

“Everybody has become uncomfortably aware of their vehicles’ fuel economy,” says Chris Horn, vice president of communications for SEMA, the Specialty Equipment Market Association. “While you can save money by driving fewer miles, that isn’t an option for most of us. Fortunately, it’s easy for practically any vehicle to get better gas mileage. And there’s a bonus: Many modifications that enhance fuel economy also improve your vehicle’s performance, and they reduce emissions.”

While they’re more prone to roll over during accidents than cars, newer
sport-utility vehicles now have a lower overall death rate, according to
a study by an insurance industry research group. But the statistics also
support a frequent criticism of SUVs: Their size and weight cause
mismatches in collisions with smaller vehicles, and those occupants are
more likely to be killed or injured… An analysis of 2001 traffic deaths
by the Insurance Institute shows the death rate in SUVs fell to 115
fatalities per million registered vehicles, the lowest among all types
of passenger vehicles. That was down from 134 fatalities per million in
2000 and from 494 per million in 1980, when SUVs accounted for twice the number of fatalities as cars. (Source: Chicago Tribune)

After I spent a couple of weeks driving GM Quadrasteers and enjoying the stability with a trailer and on snowy icy roads, I dawned on me that part of the equation was the wider rear track of the Quadrasteer. A normal GM HD 2500 4×4 has the same rear axle as a 4×2 for obvious economic reasons. So the 4×4 rear axle is 2 inches narrower than the front. But the Quadrasteer rear axle is over 3 inches wider than the front. So I remembered reading about Correctrack rear-wheel alignment system. Now I’m testing the spacers. There are several makes of trucks and vans that have this tracking deficit. Read my conclusions, click for more.. 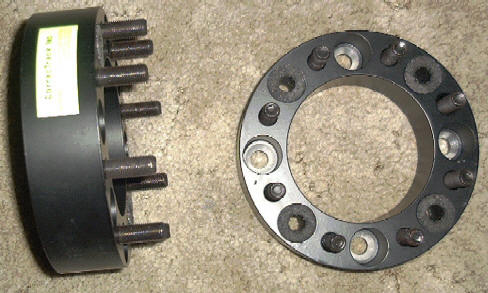 Centramatic wheel balancers can take the vibration out of the steering wheel. It’s hard to keep a tire balanced on the rough roads that a lot of trucks live on. So just after a few months of driving, your tires don’t feel new anymore. Enjoy the safety of improved, less stressful steering with automatic balancing. 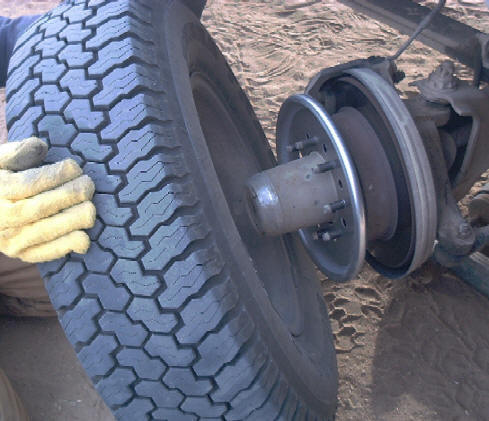 Car Crashes the Leading Cause of Death for Teens

I grew up in the country, driving on dirt roads. I discovered later how important that was to know the difference between pavement and gravel driving. On dirt roads the shoulders are soft and if you get too close, it will suck you into the ditch. Which is exactly what you do, you slow down and drive right into the ditch at the same angle. So many people try to turn hard away from the ditch and roll their vehicle. The gravel windrows that run parallel with the roads will also create challenges with steering. Were I grew up, car crashes on dirt roads were the leading cause of death for teenagers as they are today.  Usually it evolves someone not familiar with the driving characteristics of dirt roads and alcohol. The statistics I’ve read also show only 20% of the accidents happen in rural areas, but 60% of the fatalities happen there. If you survive the accident, it takes longer to get help. The below article deals with the other driving dangers for teenagers. Learn all you can, show your kids what driving on dirt roads is like and lets have safe holidays.

SPECIAL FOR THE READERS OF MR. TRUCK

September 2002 (Newstream) — Motor vehicle crashes are the leading cause of death for teenagers, resulting in thousands of deaths nationwide per year. In fact, teenagers are involved in three times as many fatal crashes as other drivers, according to The National Highway Traffic Safety Administration.

For Judy Appleby and Bob Moore, these are more than statistics. Each lost their teen in crashes. However, many experts believe accidents like the ones that took the lives of Michael Appleby and Cassie Moore can be prevented if parents and teenagers sit down together to learn and practice safe-driving techniques. Experts say teenagers are more prone to accidents because of their inexperience behind the wheel, their risk-taking behavior and immaturity.

It features an interactive Web site designed to make parents and teens aware of risks and safety measures for young drivers to help I grew up in the country, driving on dirt roads. I discovered later how important that was to know the difference between pavement and gravel driving. Reduce the number of teenagers involved in fatal or disabling automobile crashes. Another component of the program is an email drive designed to reach the millions of parents who have or will have teens at the driving age in their household.