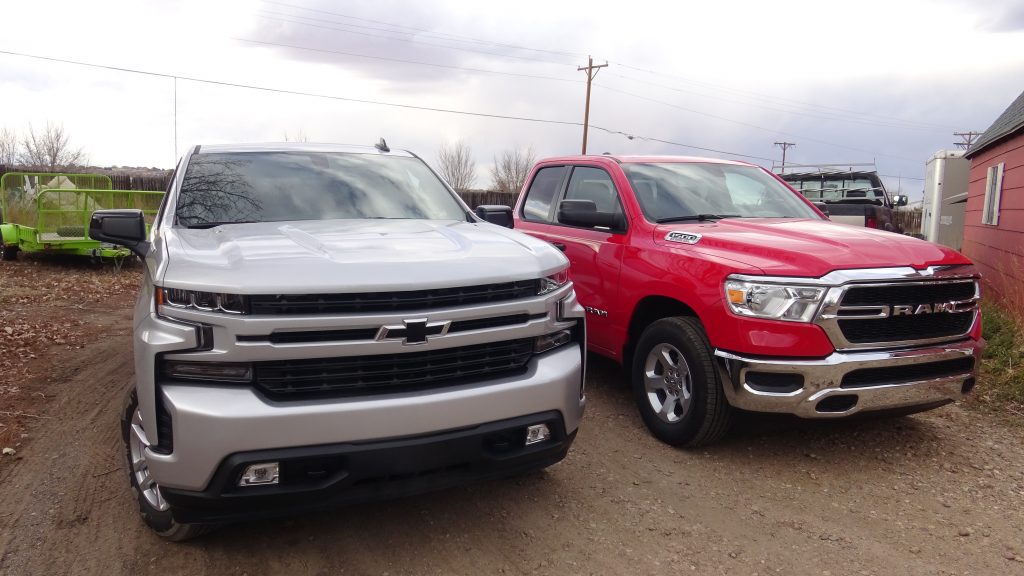 Finally 30 years later, the Big Three all have 1/2 ton diesels. 2020 Chevy Silverado 1500 Duramax Diesel 3.0L in-line 6 is the new kid on the block, which completes Detroit. And Ram 1500 3.0L EcoDiesel is back with it’s 3rd generation after the EPA problem. The two diesels they sent me for review were similar. Both 3.0 L diesels, the Ram is a V-6, but the New Silverado is an in-line 6 cylinder. The Ram is leading in torque at 480 with 260 horsepower. Silverado is leading in horsepower at 277 and torque is 460. Ram is still the 8-speed automatic and Silverado is the new 10-speed transmission shared with Ford F150.  The two trucks even have the same EPA MPG in 4×4 configuration at 29 MPG. Silverado Edges out Ram by 1 mpg in a 4×2. 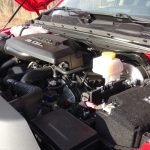 We towed a 7600 lb Iron Bull dump trailer to Estes Park. The Silverado is the only 1/2 ton diesel with an exhaust brake. Even though the Ram had an 8-speed and no exhaust brake, both truck performed similarly up and down the mountain curvy roads on highway 36 to Estes. It appears the exhaust brake and 10-speed in tow-haul mode in the Silverado doesn’t reach high enough RPM’s to down shift and build back pressure to be as effective as what we see in the heavy duty pickup trucks.

Ford had the same problem with their V-6 3.0l diesel in the F150. Then in the Limited model with the high output 3.5L EcoBoost gas engine and the Expedition Platinum model with the same engine, both with 10-speeds, Ford changed the calibration so they shifted in tow-haul mode at higher RPM’s and it made control coming down the mountain with a trailer dramatically better without wearing out the brakes.  Since the Silverado 3.0L Duramax shares the same 10-speed transmission the Ford F150, that same calibration may improve the 3.0L Duramax. 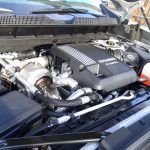 The Silverado Duramax 1500 with the 7600 lb trailer, accelerated a little better than the Ram EcoDiesel. The Ram had better control in Tow-Haul mode coming down the mountain.  The Ram 1500 EcoDiesel has a max towing capacity of 12,560 lbs. compared to 9300 lbs. with the Silverado. The Ram was a Tradesman as a base work truck with a Quadcab 4×2 which helped the truck by being lighter giving it a 2055 lb. payload. The Silverado 1500 Duramax was a RST loaded model 4×2 double cab, being heavier lowering the payload to 1800 lbs.

I do appreciate the new door sticker on the Silverado. Now on all the Chevy trucks, in the drivers door frame is a label that tells you that trucks, payload, max tongue which converts to max trailer weight, weight distributing, and combined weight of the truck and trailer. Ram has a website where you can put in your trucks VIN number and you can get those max weights. Ford wants you to speed a couple hours on the internet to find out the same info.

The 3.0L EcoDiesel option on Ram is $4995 in the Tradesman. The higher you go up in models, the cheaper the diesel option is. Nice thing with Ram, is the 3.0L diesel is available on all models and configurations. Silverado 3.0L Duramax on the midline RST model option is $3890. But Silverado only is available on LT models and above.  Ford F150 3.0L diesel started that way, only available on high end models. And XLT model was only available in a diesel to fleets. Then they discovered the error of their ways and let us all buy the diesel XLT. Over the road semi -trucks and farm tractors use in-line 6 cylinder diesels. Cummins in Ram Heavy Duty do well with the inline diesel. I was surprised to see Chevy go with an in-line 6 diesel in a 1/2 ton. Time will tell how this aluminum diesel holds up.

Tuson Trailer Tire Pressure and Heat Monitor: Trailer tires are the bane of my existence.   I found the solution, with tire pressure units inside the tires out of the way, just one repeater on the trailer to amplify the wireless signal to the truck and just a wireless receiver monitor in the truck cab. I can use it with any truck or SUV, I trailer with.  It’s very hard to find a tire pressure monitor system that goes above 80 psi. Tuson goes to 203 psi,  And it also shows the internal tire heat.  For the whole story click….